It was massive at the famous Ojukwu filed, Rumuwoji mile 1, Diobu, Port Harcourt, as the people of PHALGA came out in their numbers to embrace the candidacy of Rivers APC’s Guber candidate, Tonye Cole.

Despite detonating of dynamites, other explosive devices and shootings by PDP hired thugs to scare away APC supporters at the venue, gallant surging Rivers APC supporters where able to resist and chased the PDP rag-tags away, and continued with their rally.

The PDP thugs and Victor Ihunwo met stiff resistance from gallant APC members who chased Vorkor and his thugs away and he ran to nearby Mile 1 police station for safety.

The thunderbolt outcome of the rally and the display of gallantry by Rivers APC members today is an indication that Nyesom Wike’s Rivers PDP tyranny against innocent citizens have come to an end. 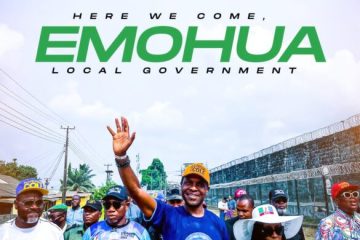